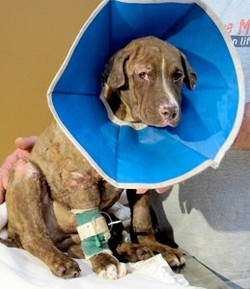 On the evening of Wednesday April 4, 2012,  DFW Rescue Me received a telephone call from Dallas Animal Services (DAS). A four-month old pit bull mix puppy needed help. Without hesitation, we did what we have done hundreds of times before –  went to help a dog at DAS. But nothing could have prepared us for what we would see that evening. The puppy had allegedly been doused with lighter fluid and lit on fire, the pup smelled of accelerant and burnt flesh, and he was burned over 70% of his body. So we scooped up the puppy and rushed him to the animal emergency hospital. This sweet brindle boy became Justice.

Details of Justice’s ordeal were described in the police report. He had endured horrific unthinkable abuse. The police report described eyewitness accounts of Justice hanging from a fence being strangled until a brave woman ran between the group of young men to cut him down. No one could have anticipated what would happen next. Witnesses reported that after being saved from strangulation, charcoal lighter fluid was poured over Justice and he was then lit on fire with the flick of a cigarette butt. The same brave woman extinguished the flames with her shirt and someone called 9-1-1. The police officers found Justice hiding behind an air conditioning unit. DAS field officers were called to the scene and they transported Justice to the shelter. Without a veterinarian on duty, they knew Justice needed immediate attention and called Jim.
For the next several days, the only focus was on taking care of Justice. He was in the caring hands of 24-hour veterinary care. Justice grew stronger hour by hour, and day by day. He began to recognize the people caring for him with a wag of his tail or a sweet kiss to their face or hand. Justice’s caregivers began to see a sparkle in his eyes. Veterinarians were cautiously optimistic he would survive.
On Monday April 9th the horrific crime was made public and local media brought Justice’s story to into the homes of Dallas residents and into the world of social media. The response and public outcry demanding justice for Justice was beyond belief. It became abundantly clear to city officials that the public’s expectation was to find and convict those involved in the torture of Justice. City officials began working the case while DFW Rescue Me continued to focus on caring for Justice. As public attention on Justice’s case grew so did his spirit, but his little body was put through too much. Dallas area veterinarians consulted burn doctors at the world renowned Parkland Hospital burn unit, and the decision was made to transfer Justice to Texas A&M University (TAMU) School of Veterinary Medicine to ensure he received state of the art treatment. At first TAMU veterinarians were optimistic that Justice would survive, they had a case similar to his the previous year. DFW Rescue Me volunteers were elated, but two days later our worst nightmare came true. Justice’s body was not able to fight the infection, it was spreading, he was becoming weaker, and the decision was made to release him from this world.
The only thing on Jim Wenger’s mind the night of April 4th was to take care of a stray brindle puppy. Little did anyone realize that Justice and his story would resonate with so many people, and touch so many lives. Justice was with us only nine days, but his story has touched people all over the world and he has left a legacy of change in the city of Dallas. Never before had Dallas Animal Services, Dallas Police Department, District Attorney’s Office, Office of the Mayor, and City Council representatives come together to deliver the message that animal abuse will not be tolerated in their city. Never had so many people gathered together to memorialize the sacrifice he made. We hope that this message will spread throughout the world. For all Justice gave, and for all he endured, we will never forget him, and will ensure his life was not given in vain.
In his honor, DFW Rescue Me has created the Justice fund to ensure all dogs that are the victims of abuse or neglect in the city of Dallas receive necessary medical care and the opportunity to know the kindness of the human hand that they so deserve. Justice will ensure they have a second leash on life.